No longer simply meat substitutes: the rise of plant-based proteins

While plant-based proteins have been used to create meat substitutes for many years, these have until recently been marketed primarily to appeal to those following vegetarian diets. 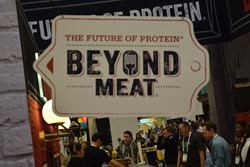 But the rise in awareness of environmental sustainability issues, the desire of many consumers to reduce the amount of saturated fat in their diets, and the need for foodservice operators to keep their ingredients costs down are all factors driving a new approach to plant-based proteins – as exemplified by the wide range on display at the 2018 National Restaurant Association Show.

Vegan sausages, soy and nut burgers, and even a scrambled egg substitute made from mung beans and turmeric were all showcased this year, with exhibitors pushing their benefits not just for vegetarian customers but as everyday menu additions and back of house ingredients for the commercial kitchen.

Certainly there is proven marketplace potential for such products – and not just in the US. The Australian success story of the Lord of the Fries franchise chain is a local example. With fast food stores across all mainland Australian states and in New Zealand, Lord of the Fries serves fries, burgers, hot dogs and shakes – typical fast food fare, but with a difference. The entire menu is free of animal-derived products – the burgers and hot dogs contain no meat, but with the menu boards simply specifying “burgers”, many customers may not actually notice that they’re chowing down on an animal-free meal. Certainly the flavour profile and mouthfeel of their various products is arguably indistinguishable from the beef, chicken and fish they emulate. 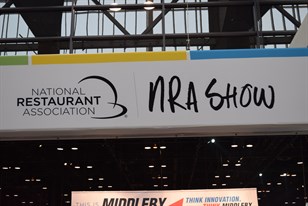 With its local sales having reached $25 million, Lord of the Fries this month announced its plans to open 100 franchised stores across India – a natural fit given the number of vegetarians there.

In the US, acceptance of plant-based proteins used as meat substitutes is growing fast. This year’s FABI Award, which the National Restaurant Association gives to products that it believes will shape the future of foods and beverages in the restaurant sector, went to the vegan Impossible Burger created by Impossible Foods, which is already on the menu in restaurants in Wisconsin, in the heart of American cattle country. Having made its international debut at Hong Kong burger restaurant Beef and Liberty, it’s likely to enter the Singapore market soon, with Impossible Foods’ CEO having confirmed the company’s plans to target the Asian market this year. 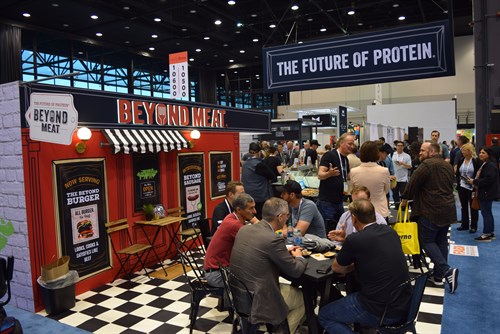 The Beyond Burger and Beyond Sausage from Beyond Meat, described as a “plant-based meat” supplier, were also on display at the National Restaurant Association show. Both are designed to look like meat, taste like meat and even cook like meat - with the sausage’s ability to sizzle during cooking touted as a selling point. Available in two flavour varieties, the Beyond Sausage is now on the menu at restaurants, fast food outlets and sporting venues nationwide – even New York City’s iconic Yankee stadium.

San Francisco-based Just Inc is the company behind the scrambled egg substitute made from mug beans, oil, water and spices - the turmeric is added primarily for its colouring effect. An ideal alternative for consumers with food allergy or intolerance to egg and/or dairy, the product was developed to look and taste as good as the real deal. While Just Inc’s products are all free of animal ingredients, the company avoids using the term ‘vegan’ on its labelling – in recognition of the broader marketplace appeal that such products are now enjoying.

The potential customer base is strong – those consumers who enjoy the taste profile and mouthfeel of meat, but who want to reduce their consumption or need to eliminate it for health reasons, as well as those who don’t care one way or the other about the ingredients as long as they’re getting tasty and satisfying food at a competitive price. There is also much publicity to be gained by early adopters of such products – those restaurants and franchise chains which have taken up these products in the US are benefiting from extensive media coverage of the plant-based protein trend, and the value of this in promoting one’s business should not be underestimated. 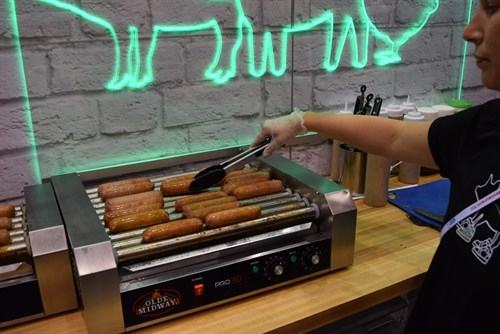